Thirty years ago, right before his 26th birthday, Bryan Boyd conceptualized an idea that would take him the next ten months to complete. It was a dream inspired by our East Texas history that included one of his favorite local towns, Jefferson Texas.  He became inspired to recreate a scene out of history.  The Mittie Stephens was a steamboat that would occasionally dock in Jefferson with passengers and cargo on board.  Bryan eventually learned that there was really no visual records of the historical event.  He set out to research and recreate this moment in time. 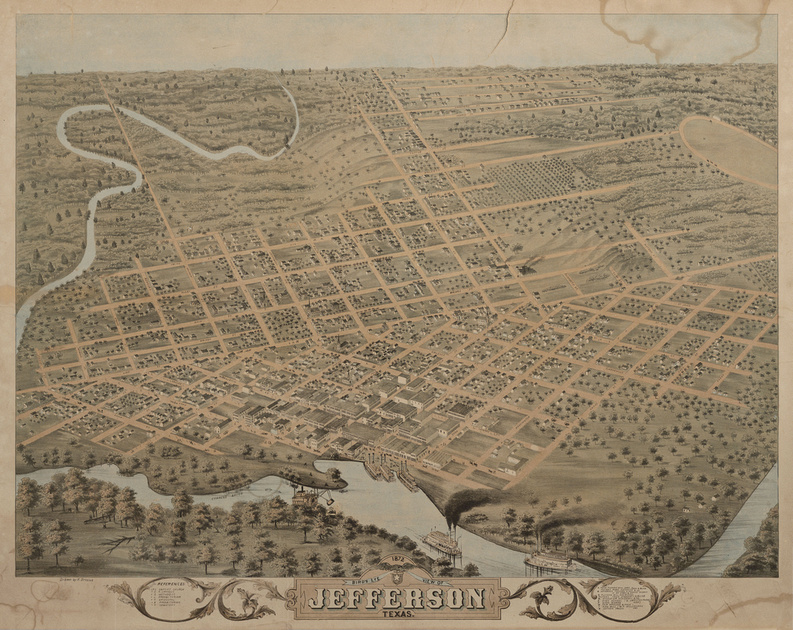 Steamboats traveling up the Big Cypress Bayou to The Port of Jefferson were difficult to visualize.  The information collected was not local photos but four key documents.  A bird's eye view drawing 1873 by H. Brosius, 1885 Sanborn Fire Insurance Maps, a legal document for construction on the Jefferson wharf and Mittie Stephens musical sheet cover. Most of the information about the survey and layout of the wharf was obtained from Duke Deware. 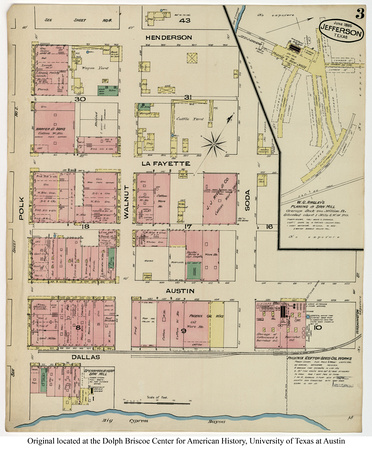 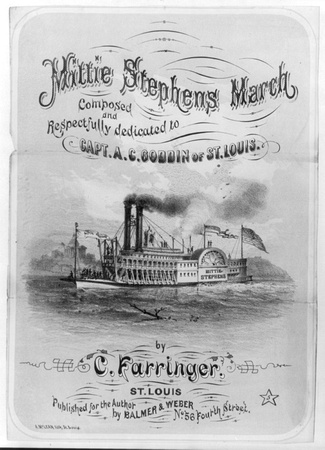 Ruby Lang, an archaeologist looking for the wreck of Mittie Stephens was able to give details of the construction, width, length also a image from another steamboat built at the same manufacturer.

Her thesis below ...it is a well written account to the history surrounding Jefferson and Caddo Lake.

The first idea sketch was drawn, then from here the final composition emerged. 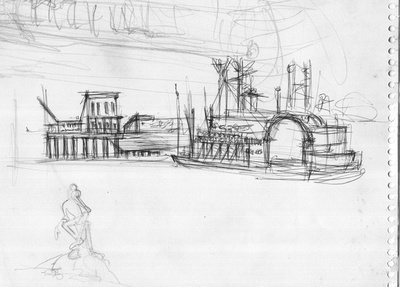 After compiling the supplied information a layout was created from three individual scenes. The buildings drawn to scale using the Sanborn map for width along with birds eye map for height. Combined with the contract to rebuild the old wharf using the surveyed measurements for the angle and distance how it lined the bayou bank along the distance of Dallas Street. Then placing the steamboats while moored to the wharf. The story goes that the Era no. 9 traveled pass soon after the Mitty Stephens met its final voyage.  From the attached images you will be able to see the details for the final drawing.

With any interpretation there are flaws as how the port and the steamboats appears.  The distance from the building to the left on pier and beam is much closer to the boats. Even the height from the waterline to road level was far less then drawn. This was all artist-inspired. Even to the point of putting a slight curvature along Dallas Street to give a 3-dimensional effect when viewing the panoramic painting. The hardest part was how vanishing points work in water reflection. 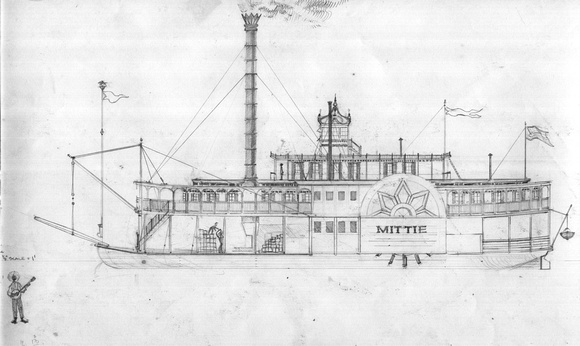 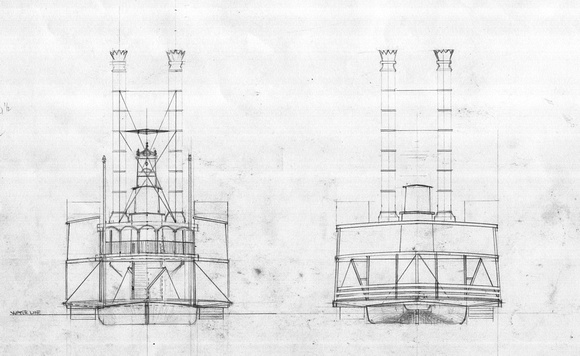 When the final drawing was completed a technique using a grid on the illustration, also placing a grid on the canvas 4 times the original. Then transferring every detail to canvas point to point.

By April there was a dedication at the Stillwater Inn. Jefferson's Pilgrimage of 1986 was the first public viewing along with posters that were being signed on the front porch of the Black Swan across from The Excelsior House. During this time life was very simple making this dream easier to grasp. The original was sold 2001 to Duke Deware and money was used for my wedding to my wonderful wife Karen Boyd. Few of the original prints are still available for sell. 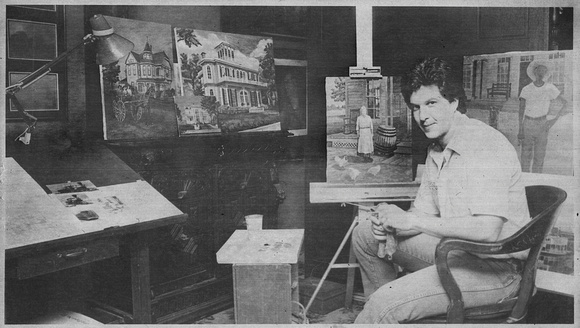 Several online accounts of the tragedy.

It was an East Texas nautical accident too terrible to comprehend.

On the evening of Feb. 12, 1869, the sidewheel steamboat Mittie Stephens caught fire on Caddo Lake, taking 61 men, women and children to a watery grave.

Rumor has it that as much as $100,000 in gold sits on the bottom of the lake because of the disaster.

"There was the smell of fire on the hurricane deck, which was reported to the pilot," reported Jefferson's Feb. 13 Home Advocate newspaper. "The fire was soon discovered in a pile of hay. … Several buckets of water were thrown upon it instantly, but the flames still mounted upward, and spread so rapidly that all hope of extinction was given up."

The Mittie Stephens had an interesting history. Constructed in 1863 in Indiana, it served as a transport ship for the Union Navy during the Civil War. It participated in the Union's unsuccessful 1864 Red River Campaign to capture Shreveport, La.

The boat was sold into private ownership, plying the Missouri River for a while before relocating to the Red River's New Orleans-Shreveport-Jefferson route.

The Dallas Herald called the Mittie Stephens "one of the largest and finest passenger packets plying between New Orleans and Jefferson."

The steamboat made her first trip to Jefferson in 1866. A huge jam of downed trees and silt had created what was known as the "Red River Raft," which blocked the river above Shreveport. The result was a navigable route from the Red River through Caddo Lake to Jefferson.

The Mittie Stephens had left New Orleans on Feb. 5 with 107 passengers and crew. On board were some 300 bales of hay, a supply of gunpowder and allegedly a large amount of payroll for federal soldiers.

As the ship neared Swanson's Landing shortly before midnight on Feb. 12, a crewman smelled smoke, saw flames and sounded the alarm.

The Shreveport South-Western newspaper reported: "Nearly 100 frantic, terror-stricken people, men, women and children, were collected … with the flames hissing and crackling behind them and a watery grave before them."

Jefferson's Home Advocate said the boat "was turned to shore and the passengers aroused. Confusion reigned. The passengers and crew were driven aft by the flames, so that while the boat grounded in shallow water but a few feet from shore, they must leap into deep water or be consumed by the flames."

The paper said, "One young lady passenger begged her protector to throw her overboard. His heart failed him, and they remained together till enveloped by the flames … We learn that the engineers and many of the crew perished at their posts."

"In less than one half hour from the discovering of the fire, the vessel was a total wreck, and over sixty persons had perished," said the South-Western.

Among the victims was J.C. Christian, "one of the oldest and most respected citizens of this (Caddo) parish. He got on board the Stephens at Mooringsport (La.), where he had been waiting two days, and in less than an hour met a watery grave in sight of the port from which he embarked."

Another Jefferson paper, the Jimplecute, noted on Feb. 16: "Our citizens have not yet recovered from the shock of one of the most appalling occurrences that has ever happened to steam boating west of the Mississippi ... The officers and crew did all that could be done to save the lives of the passengers."

According to the New Handbook of Texas, the Mittie Stephens had "burned to the water line. Her safe, bell, boilers and machinery were salvaged shortly after the sinking." 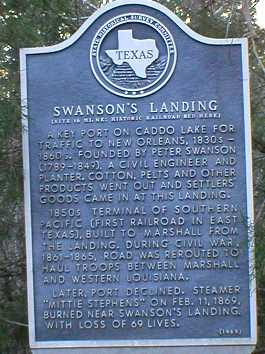 Victoria Wilson-Johnston(non-registered)
My ggg grandfather, Captain George R. Remer, was the acting 1st Clerk on this Steamboat. He was filling in for a crew member who was ill at the time in Shreveport. He died in the incident. He had owned (and co-owned) and mastered several riverboats on this same Red River from New Orleans over a period starting in the later 1850's until his death in 1869.
Brandon Newman(non-registered)
Awesome page man!!! Glad to stumble across it brings back a lot of great memories man..
No comments posted.
Loading...
Subscribe
RSS
Recent Posts
Going on 30 years
Keywords
Archive
January February March April May June July August September October November December
© 2B Imaging & Design
Powered by ZENFOLIO User Agreement
Cancel
Continue